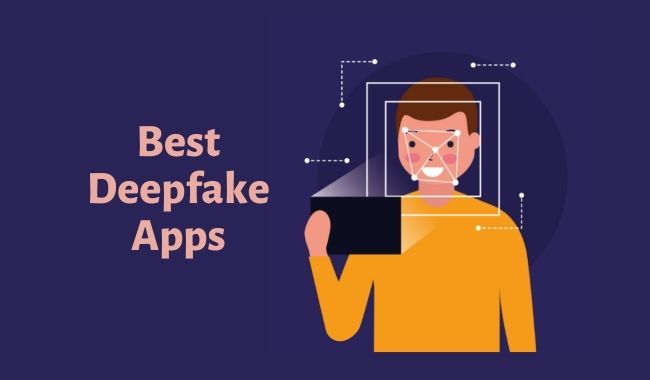 Deepfake applications alter the images and videos using artificial intelligence to trick you into believing something isn’t true. Most people use deepfake apps to create memes and make use of it to spread false information faster than they ever could.

Using deepfake apps people can create characters that don’t exist or show real people saying and doing things that they did not do. Deepfake apps are mostly used to make highly deceiving audio-visual material for both good and bad purposes.

In 2017, a Reddit user with username “Deepfakes” created the term “deepfake”, who used Google’s open-source deep-learning technology to make fake videos and uploaded them on Reddit. He made those videos using “face-swapping”. And from then it got popular and this is how the deepfake technology started.

In this article we will discuss the best and most popular deepfake apps and websites for android and ios.

Wombo is an AI-powered lip-sync application that allows its users to turn paused faces into singing faces, there are many songs to select and users can choose any character they want to see in the video and as this app uses an AI-generated face swap the results are flawless.

The platform lets users select which characters they would like to roast, and the amount they’d like to invest in it. Wombo has the few Photoshop quality features and can also make animated lip-syncing videos and are quite realistic.

Perhaps you’ve heard the name Doublicat, and the creators of Doublicat have changed the name of the application to Reface AI. Reface AI acts as one of the Generative Adversarial networks behind the scenes.

While using the application it is easy to snap an image and then select the gif you wish to use. Everybody has their favorite celeb and in this app, users can exchange their faces with their favourite celebs in case they want to.

The Reface app is one of the most authentic Deepfake apps available online. Because its face detection algorithms can work with any kind of facelift and impressive quality. Users can also create short videos in seconds for its users.

Another app that is viral for deepfake technology is MyHeritage. The Deep Nostalgia feature in it gained popularity as it allows the users to create animated images.

The best feature of the MyHeritage app is that it allows understand about their family’s background, create a family tree and share them with others.

It also allows you to see unlimited stories of people, normal or famous around the world, and make you feel connected with different cultures.

The application also comes with an animation option that allows the user to create animations simply by uploading photos. The MyHeritage algorithm is perfect for creating animated scenes from images and enjoying nostalgic vibes.

Jiggy is another Deepfake application that allows its users to dance with the help of a GIF image. In this app if you’re trying to make fun then you just need to snap an image of yourself and choose any of the dancing moves in the app then Jiggy will then apply the rendering technology to insert your image in the GIF and present an amazing blended result using the given two. It’s an amazing app to give it a try.

Zao is one of the most advanced applications and it is gaining popularity majorly in China due to its innovative capability to make fake videos in minutes. Users can select video footage from the library, which comprises scenes from Chinese dramas, Big Bang Theory, famous Hollywood films, and many more, and these GIFs can be published via social media platforms too.

Zao can create an incredibly authentic deepfake video within a few seconds that looks authentic and is indistinguishable from its original version.

It’s sad to say that it might not be the ideal choice for those who are not from China because while signing up users have to input a Chinese telephone number.

Even if you can download the app on Android outside of China, you will not be able to see the usual facial expressions in the videos. The app looks a bit odd on Indian faces too and doesn’t appear like a natural look.

FaceApp is among the most downloaded deepfake applications across the globe and is the top app of the year worldwide. This app is most well-known in America but it’s published by a Russian developer.

It offers an amazing assortment of AI filters, backgrounds effects, and tools that can turn portraits into magazine cover photos with just a single tap. The application runs on the AI face editor, which makes use of advanced features such as Neural facial editing.

In FaceApp users just need to upload their photos and check out what they’ll be like when they’re old and much more in the most realistic form.

Deepart, a new tool for creative designers and artists is revolutionising the way people consider art. Deep Art uses artificial intelligence that allows anyone to create artwork from images without prior knowledge of designing or programming.

It’s not a fake video-making application, but it produces deep fake photos by transforming the images into art. It’s a no-cost app and comes with a variety of filters for different art styles.

It also has ultra HD features, which are of paid versions. It is a great tool to create structural objects using antique themes, paintings, and more.

In this app, you can enjoy 3D effects, and interactive face warping using a variety of features and masks. If you’re searching for a fake app that is deep, Face Swap Live can be a fantastic alternative to the Zao app.

Deepfakes web β is another choice that allows you to create fake videos online utilising Deep learning to make the process going. Deepfakes web β can take as long as 4 hours to train and learn with images and videos, and it takes 30 minutes to switch faces using the model trained.

The app takes time to analyze a person’s face and transfer it onto another body. Deepfakes web β can be a good choice for students and computer analysts who want to make Deepfake videos.

The DeepFaceLab is a Windows software that lets you create deepfake videos. It’s not just an entertainment tool but also enables users to better understand the technology more thoroughly.

It uses deep learning, machine learning, human image synthesis, and other technologies that are specifically developed for researchers working in the area of computer vision and deep learning. It requires a powerful GPU and a high-performance PC to run this software.

Fakers.app is the first-ever deepfake application that lets you create Face swaps, and even share the results. This software lets you show off your impersonation talents or recreates classic scenes using lips syncs from the app’s media library.

With the fakers.app’s astonishing artificial intelligence technology, the video gets linked to another with the most realistic design you’ve ever seen. It is accompanied by realistic faces, expressions, and even movement.

Deepfake apps also poses a serious threat to society. Since the majority of online users trust their opinions without verifying the authenticity of their claims, fake news poses danger to the truth.

However, the technology isn’t in place to convince anyone currently. But soon tech giants will surely find a way against this threat to our society.