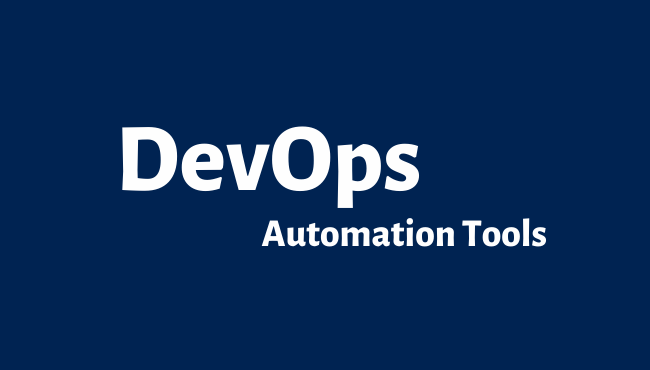 There is no doubt that companies that aim to move ideas and projects from development to production faster and more effectively will have implemented DevOps practices.

It collaborates development and operations teams together into a single DevOps team, therefore enhancing the product development life cycle.

With the integration of DevOps, there can be more regular changes to code and more dynamic infrastructures can be leveraged when compared to conventional, manual management strategies.

However, DevOps automation is the process of reducing human intervention and introducing computers or machines to manage redundant tasks in the software deployment and operations lifecycle.

It reduces the stress on employees and systematically helps operators to deploy iterative updates faster hence boosting their systems to operate more reliably. For this, efficient DevOps automation tools are leveraged by enterprises.

But we know that by combining development and operations teams together, enterprises can improve the SDLC life cycle, so why should enterprises go one step further and automate DevOps work?

Why Should Enterprises Automate DevOps Work?

Every IT employee understands that from an engineer’s viewpoint, DevOps automation tools empower development teams and make them more efficient and effective. It significantly reduces inter-team dependency and helps eliminate manual processes for infrastructure provisioning and configuration.

Hence, with the implementation of such tools, developers are able to augment the frequency of software or application releases and obtain more instantaneous feedback, thereby enhancing their comprehensive development experience.

From an enterprise perspective, DevOps automation decreases the required time to deploy software features. It also significantly increases platform dependability and availability and decreases human intervention by analysing and solving errors automatically through a strategy known as auto-healing.

DevOps automation is also capable of reducing not only system errors but also incidents caused by human misconception or environment inconsistencies.

Moreover, it eradicates the requirement for large teams to be involved in the development lifecycle, therefore, reducing the expense on resources, infrastructure and speeds up the entire process.

There are an immense variety of unique yet efficient DevOps automation tools available in the market today. Each of these tools has its distinctive capabilities and offers enterprises to perform different functions based on their unique business demands, such as:

For businesses and enterprises to decide on the proper set of DevOps automation tools still is an ever-growing challenge for decision-makers.

There are also enterprises that do not just depend on a single tool but combine the benefits of different automation tools to leverage the advantages of a fully-fledged automation solution.

Below are some of the top DevOps automation tools that dominate the software industry in 2022.

Puppet is one of the most technologically advanced cross-platform DevOps automation tools that is utilised to configure, deploy, and handle servers.

Its fundamental advantage is that it makes the infrastructure or platform deployment much faster and more secure. It configures each and every host in the business infrastructure and controls the servers by scaling up and down the machines dynamically based on real-time insights.

It has multiple modules that can be incorporated with numerous other acknowledged DevOps tools very quickly, hence as mentioned earlier, businesses can leverage the combined benefits of more than one DevOps automation tool.

Docker is one of the most widely used DevOps technology suites that empowers DevOps staff to quickly create and operate distributed applications promptly and efficiently. It preserves a confidential registry to accumulate and handle images and to configure image caches.

Docker tools are operating system (OS) and platform-independent and therefore can seamlessly be integrated with cloud computing and other advanced technologies.

Jenkins is a common CI/CD automation tool leveraged by DevOps teams for observing the execution of repeated tasks. Similar to Docker, Jenkins can also be driven on any operating system as it is an open-source platform and written in Java.

The most beneficial part of Jenkins is that it presents a number of predefined built-in plugins for continuous integration and continuous deployment which is the most critical part of DevOps.

The CI/CD properties allow constant implementation of test automation services so that the product can be tested and verified from the initial development phase itself and testers will no longer have to wait for the SDLC to end in order to test the final product.

Bamboo is also a CI/CD DevOps automation tool that empowers enterprises to seamlessly automate the delivery pipeline, from the initial design to final deployment.

Even though Bamboo has a very little number of plugins when compared to Jenkins, it can be effortlessly integrated with other popular DevOps automation tools to implement the combined effect.

It can also be incorporated with products like Jira and Bitbucket, hence helps not only the DevOps team but also the project managers and clients to continuously streamline the updates and status of the entire software development life cycle (SDLC).

Terraform is a cloud infrastructure allocating tool for enterprises. It helps the DevOps teams in seamlessly determining which infrastructure is described using code.

It provides a graph of all resources required in the product development life cycle and develops or modifies any self-dependent resources in parallel and sustains a different version.

Terraform automates the creation of an execution strategy where each step of attaining the expected outcome is precisely and comprehensively described.

Once this strategy is approved by the decision makers, Terraform then automatically executes the plan to construct the defined infrastructure.

By using this strategy, Terraform empowers the enterprise DevOps team to create and modify infrastructure efficiently and in a secure method with minimal human or employee interventions.

Tools to automate testing and DevOps integration were well established and sought out not only in the year 2022 but in the previous years as well.

But with the emergence of the COVID-19 pandemic, several enterprises had to automate their usual tasks. It was extremely challenging for businesses to bring together operations and development teams during work from home and lockdowns.

How Does a School Management Software Work?