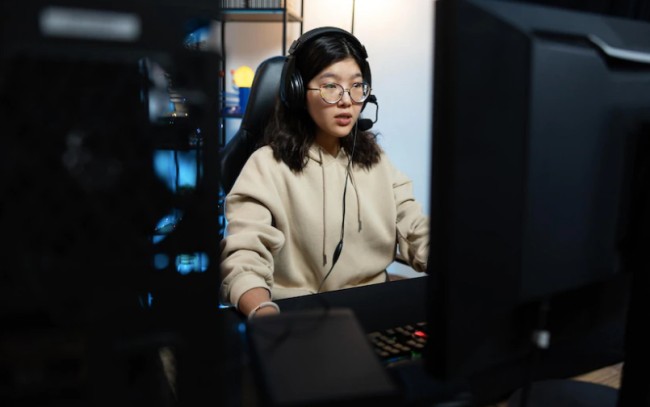 Even a few years ago, it wouldn’t have surprised us in the least if someone said “competitive gaming is only for the boys.” But now, we can proudly claim that the gaming metaverse has come a long way in bridging the gender gap.

Female Twitch streamers are a burning example of how gaming is no more a men’s business, but it is a platform that welcomes every interested player, no matter what their sex is.

If you are someone who loves to watch Twitch streams, then I have a list of the top 10 best female Twitch streamers just for you. Keep reading this article to find out all about them!

Whenever we think of female Twitch streamers, Pokimane is the first name that pops up in our heads. Imane Anys, who uses the gaming name of Pokimane, is known among the gaming tribe for her amazing Fortnite and League of Legends streams.

Imane started her Twitch channel in 2012 and as of now, she has around 3.4 million subscribers and 7.4 million followers. Her popularity has now spread to other platforms as well as she has reached 6M followers on Instagram. Pokimane is arguably one of the most famous female Twitch streamers as of now.

Loserfruit is another amazing female Twitch streamer that fans can’t stop gushing about! With over 2.5 million followers on Twitch, Loserfruit knows very well how to serve up unique content for her fans.

She has amazing gaming skills and is known for playing games like Overwatch and Witcher 3. She also does vlogging for her fans. She continuously does editing while she is broadcasting and this is one of her biggest talents.

Her amazing content makes her one of the most engaging streamers on the platform, and she stands out as a top female Twitch streamer.

If you are into watching Twitch streams, there is no chance that you’ve never heard of Lilypichu. She is one of the most popular personalities on Twitch and she has got fans outside of the Twitch world too.

Her YouTube channel is always bustling with subscribers and she plays games like League of Legends on her streams. She loves all things Asian, so her profile is filled with Japanese and Korean aesthetics.

Her Twitch subscriber count is currently at around 734,000 subscribers. She also plays anime playlists on the Twitch platform. She has around 2.4 million followers.

When you think of female eSports players on the Twitch platform, CHICA is the first name that pops into our minds. She is one of the top-rated esports players there, with widespread popularity for streaming multiplayer shooting games.

She has tried her hands at multiple games like Summer Skirmish and Keemstar’s Friday Fortnight. On Twitch, her subscriber count stands at around 400,000 subscribers.

She has got almost 1.9 million followers. She is one of the highest-ranked members of clans like the DooM Clan, BushBandits, etc.

Loeya is a Swedish female Twitch streamer, famous for playing various shooting games like Counter-Strike, Witcher 3, Sea of Thieves and Fortnite. She has got around  953,000 subscribers on Twitch and about 1.4 million followers as well.

She has made amazing progress as an emerging female player on the platform considering the fact that she has only joined Twitch in 2017.

Like many other streamers, she also has her own YouTube channel where she connects with her fanbase every so often. Her fans are also known as ‘Loeyalists’.

With around 800,000 followers for her Arena streams (Hearthstone game), she offers a unique experience for her fans to watch her compete with other players with the decks.

On these streams, she plays a wide array of games like PUBG and Overwatch. You might have heard of Kittyplays even if you are not an active member of the Twitch community.

This is because she is also quite popular for her vlog content on YouTube and Instagram. She knows how to keep her audience engaged with all the stuff she does in a day in her vlogs. She has around 1.1 million followers.

Ironmouse has now set off a buzz on the Twitch platform for her amazing energy, great playing style and interactive streams. Due to her enviable performance, she has become the most subscribed female Twitch streamer now.

She has crossed Kkatamania’s record of the highest subscriber count as a female Twitch streamer and has received 1 million followers and 100,000 subscribers on the platform.

Coming to the ninth name on this list of the top 10 female Twitch streamers on the platform today, Janet Rose is whom we have chosen. She is one of the best players on the platform and her live streaming channel on Twitch is famous by the name of XCHOCOBARS.

She is known for serving up fresh content for her fans on Twitch every day with amazing League of Legends stream videos that have got her cheerful voiceover commentary to top it all off.

She enjoys the status of one of the top female Twitch streamers and has signed a contract for a partnership campaign with Japan crate where she reviews and recommends their products to her huge subscriber base on Twitch.

Coming to the tenth name of this list, we must mention DIZZKITTEN because any article about female Twitch streamers is incomplete if we don’t include DIZZIKITTEN in it.

She is one of the topmost Twitch players and her fans enjoy her amazing streams on the platform PUBS. She has a follower count of around 649k followers. Her constant interaction with her fans makes sure her audience engagement rate is high all the time.

She loves engaging with her fans through occasional QnAs, and also on the weekend streams. You can catch her live with her fan base for almost 5 hours straight from 8 pm to 1 am and that too for five days a week.

Surely, being a streamer requires some hard work and great consistency! She has stuck to this routine for some time now, and this hard work has led her to become one of the top female Twitch streamers. She plays many games like Global Offensive, Counter-Strike, and Super Hexagon.

With this, we come to the end of this comprehensive list of the top 10 female Twitch streams on the site right now. If you found this list informative and helpful, please share it with your gamer friends! You can also check out our other articles on this website.

Let us know in the comment section if there are any other female Twitch streamers whom you would’ve wanted to feature on this list. Till then, go ahead and enjoy the streams of these amazing players and have a great day!