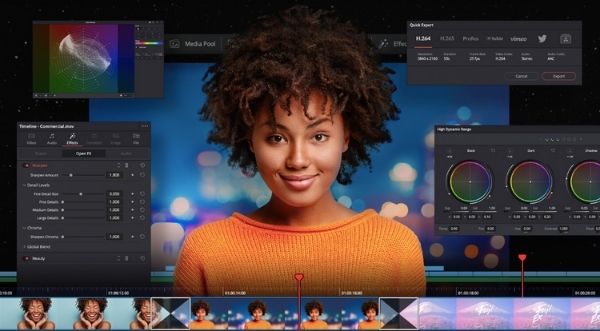 Davinci Resolve by Blackmagic Design was initially created for commercial filmmakers, but with several new iterations this video editing software added many powerful tools at its disposal.

What Is DaVinci Resolve?

Blackmagic Design made several modifications and enhancements to make it a strong contender for color grading, video editing, special effects and sound mixing at an affordable price.

For most people doing light video editing or audio touch up work then the free version works well to take on the task, although the free version is a fully functional software with no limitations imposed on the user.

The interface is modern, although there is a learning curve that may warrant the viewing of one or two tutorial videos. It offers presets to make it look like other editing softwares in layout.

Overall it seems as though Blackmagic kept the overall look of the platform familiar for editors while adding enough new features to pique the interest.

For editing and rendering clips, DaVinci Resolve features a video-playback engine with CPU and GPU optimization, allowing for a smoother editing process and quicker render times.

Playback is surprisingly peppy when toggling back and forth using the spacebar shortcut keys, which is a significant improvement when compared to previous editions where playback wasn’t nearly as seamless. I prefer Resolve’s cutting tools when compared to Premiere Pro, which is intuitive and easy to use when trimming clips.

The boost in playback can be attributed to Resolve’s GPU Acceleration for video stabilization, ResolveFX Match Move, Super Scaling and more.

Compared to jumping in and out of programs that serve different purposes, Blackmagic hit it out of the park as Davinci Resolve has four modules housed in one place: editing, color correction, audio effects and visual effects.

It’s finally possible to bring teams of editors, colorists, sound engineers and VFX artists together so they can collaborate on the same project at the same time, all in the same software application!”

One of the greatest benefits of using Davinci Resolve is its color correction and grading capabilities, which are far better than Adobe Premiere Pro or Apple Final Cut Pro X.

The program also offers a “live save” option to prevent losing edits on the project. This feature lets you specify how often to save a new project backup, whether you want to specify minute, hourly or daily backups.

Users can also utilize nodes to layer changes to images while turning off individual nodes and orders to change the picture presented on screen. There are also keying and masking capabilities to correct the image as precisely as possible, although the color correction curves and bars aren’t user-friendly.

Colorists get an entirely new LUT browser for quickly previewing and applying LUTs alongside newly shared nodes to streamline individual changes across all nodes.

Regarding audio editing Blackmagic’s DaVinci Resolve is similar in capability to Adobe Audition. The software offers a full professional mixer, several plug-in effects, equalization and dynamics, editing and automation, making it great for anyone who are interested in podcasting.

Performing dissolves or audio track fades is an easy process and if you need to perform any extensive audio edits, the dedicated Fairlight audio editor is much easier.

The Echo and Delay plug-ins allow you to have copies of original audio playback at different timeline points, while the Distortion plug-in allows you to distort the sound as if it were being played through bad speakers or old recording devices.

Davinci Resolve comes equipped with Fusion, a powerful visual effects app that’s used in Hollywood films and is a great alternative to Adobe After Effects. It offers all the same tools like 3D compositing, particle effects, 3D text tools and more.

The Fusion toolbar houses more than 250 tools including the following features:

Being able to support 4K and 8K, below is a complete list of supported formats and codec for Resolve’s media composing:

How Much Is Davinci Resolve?

If you’re looking to edit videos in higher frame rates above 60fps or better quality than 1080p, the paid version of DaVinci Resolve offers those settings. The free version, Davinci Resolve lite, is fantastic for color editing tools.

The paid version costs a one-time fee of $295, which is a fantastic deal compared to other subscription-based services. Below are other features available on the studio version or premium Davinci video editor:

Simple Traffic Review: Is It Worth To Use?