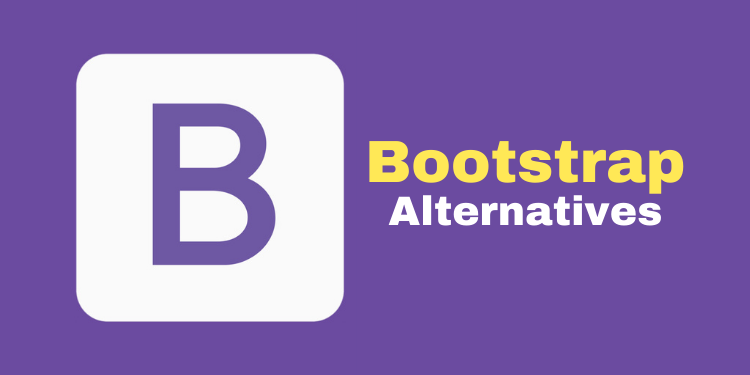 Bootstrap is one of the been most popular front-end frameworks and has appeared on the top list of the most important tools for many developers. There are not many frameworks with a wide range of possibilities like Bootstrap when it comes to designing front-end websites.

Bootstrap’s user base is really huge, and it’s the second most starred project on GitHub, with over 148K stars as of February 2021.

Skeleton is a lightweight CSS framework, very popular for its 12-column grid, consisting of rows and columns, similar to other CSS grids.

The newest version of Skeleton has a mobile-centric approach, allowing the design to be the center of attraction, regardless of screen size. Being lightweight, Skeleton can speed up the front-end development process.

Skeleton is the perfect Bootstrap alternative if you want to create something small and simple with a bunch of larger framework utilities.

Element is a framework that relies heavily on the Vue.js library. This bootstrap alternative allows developers to create their own theme and comes with different color schemes that can match the tastes and requirements.

The main disadvantage of using the Element framework is that developers need a basic understanding of Vue.js.

This is another highly customizable BootStrap alternative with many functionalities. This framework has both free and paid versions.

Instead of prebuilt components, low-level utility classes to create your own custom components. The framework is a bit controversial among developers, as some like to use out-of-the-box components while others don’t.

Groundwork is a responsive, lightweight, and flexible front-end framework that enables developers to build scalable and accessible web applications.

It has a highly configurable, responsive, and adaptable fluid grid system, which allows the framework to work on any type of screen: mobile phones, laptops, and even large screens.

The framework is easy to customize and developers can put their own styles and bolt-on for additional functionality. GroundWork CSS 2 is built on Sass and Compass and has the tools to create responsive headers, text blocks, and tablets.

Pure.css is a group of CSS modules in a CSS framework and is incredibly lightweight and designed especially for mobile devices.

It enables developers to create responsive layouts by using grids, menus, forms, buttons, and much more. This small but useful framework is the best Bootstrap alternatives when it comes to mobile devices.

Cardinal is a CSS framework for high performance, scalability, and ease of maintenance. This ‘mobile first’ framework makes it easy for developers to create, scale, and maintain responsive websites and apps.

The framework comes with a series of helper classes for quick styling of an element, reducing development time.

Cardinal also extends the compatibility with modern browsers such as Google Chrome, Mozilla Firefox, Safari, iOS Safari, and Android. Its mobile-first approach and CSS Box model make it a perfect alternative to Bootstrap.

It encapsulates everything a user needs to quickly create an HTML layout and is perfect for HTML Wireframing. It is free, open-source, and approximately 300 Kb in size.

TopCoat is a simple and clean CSS framework and is one of the best alternatives to BootStrap. The framework is a bit heavier, but it also comes with the best theme options.

UIkit provides is a front-end framework to develop a fast and powerful web design. It consists of a complete set of HTML, CSS, and JS components. These components are responsive and use conflict-free and reliable naming conventions.

It is easy to use, easily customizable, and expandable. It allows developers to write sound and extensible code that can be easily maintained.