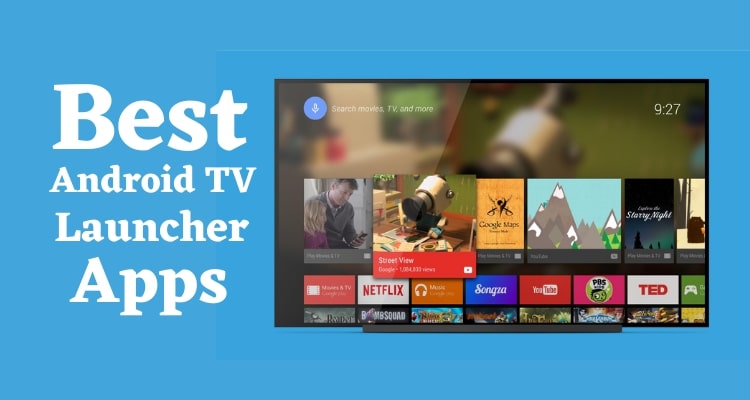 The launchers that come by default in most TV Boxes are quite boring with ugly icons and pastel backgrounds that give a very unattractive touch. Do you want to customize the interface of your Android TV so that the apps are shown in a more elegant and colorful way?

There are few launchers in the Google Play Store that are really good and serve to significantly improve the user experience. In this article, we take a look at some of the best launchers for Android TV Box.

Some TV Boxes do not allow changing the wallpaper. When you install a traditional launcher designed for mobile phones on a TV Box, it is a nuisance. You can not change the wallpaper and instead, you will have black wallpaper.

Luckily with ATV Launcher you can skip that restriction and put the wallpaper that you want. In general, it is an excellent custom launcher for Android TV with an intuitive interface and a step up from the horrible launchers.

Smart Launcher 5 is specially designed for mobile phones, but it adapts quite well to the panoramic format of a TV. It presents 2 customizable desks: one with the app drawer in a circular shape and the other more traditional.

It has a really basic design and most loved by users who are looking for is a minimalist environment without distractions.

A different launcher with a really clean and neat interface. It has some customization options, although some more could be included for the user’s taste. One of its best features includes advanced support for air mice and adaptive remote controllers.

UGOOS TV Launcher is one of the best launchers for your android tv box. However, it is not compatible with some Android TV box models.

A launcher with an aesthetic very similar to that of the WebOS and TizenOS interfaces that we see on Samsung and LG smartTV. Therefore, TVHome Launcher is the best launcher for those who want to emulate the experience of a smartTV on their Android TV box.

The applications are shown in a single line in the lower area of ​​the screen, giving a clean and elegant touch to the user interface. To navigate simply move left and right with the remote control and the wallpaper is customizable. It is easy to use as well as functional.

Square Home 3 is one of our favorite launchers for Android TV. It offers fully customizable options, with different sizes for icons, colors, shading, widgets, customizable wallpapers, and more. The interface is of the Metro UI type, which is known to appear in the most recent versions of Windows.

This is a launcher designed to show and open apps that have not been specifically designed for Android TV. Normally in TV boxes and portable consoles with Android apps that might otherwise work if you load them in the background, something that you can solve with this launcher.

As for design, it is not that good, but it has many customization options for sizes, fonts, and colors and allows changing the wallpaper.

Generic name launcher developed specifically for Android TV. The design is somewhat more static than Square Home and with fewer customization options, but it comes across as a clean and elegant design.

Despite being developed by an amateur developer, it offers quite interesting results. If you are looking to renew the appearance of your TV Box, it is well worth taking a look.

The only downside is that it has built-in ads that jump from time to time and this can be solved with the premium version.

Simple TV Launcher is capable of housing a panel with 6 large buttons where you can assign the apps you use the most. It is a fairly stable launcher and does not give many problems.

Allows the use of animated wallpapers if your TV box supports them and you have one saved wallpaper in the internal memory). It is completely free, and like the 2 previous launchers we just mentioned, it does not contain any type of ads.

Sideload Launcher is also one of the best launchers for Android TV boxes. Like HALauncher, this is a launcher to load all those apps that do not appear on the Homepage of your Android TV.

A very practical launcher that does not have any compatibility problems when using the application. It is more stable than HALauncher.

Hope you like this article, let us know what launcher you are using on your Android TV box in the comment section.