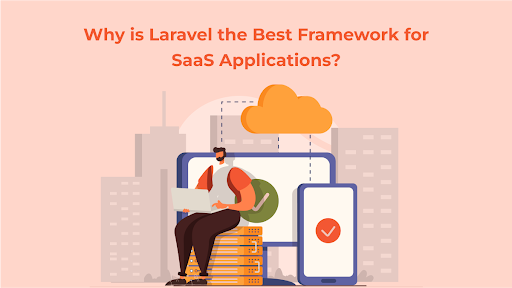 When we talk about the development of SaaS, there are so many hurdles that developers tend to face. One of these challenges is operating on the product’s architecture. The solution for this issue is to find and select a reliable and solid framework that can work perfectly for such services.

It has been said that Laravel is the best choice for SaaS developers due to various reasons. One of the reasons includes the powerful and consistent performance of SaaS along with Laravel.

In this article, we will dicsuss more about Laravel, SaaS, and why Laravel is an excellent framework for SaaS applications.

What do you mean by SaaS?

SaaS can be referred to as a cloud-based environment of IT in which a software program gets distributed directly to its consumers or users. These days, most businesses are known to utilize various types of cloud-based software.

Customers can access this software via a web browser or any particular app. There is no need for users to download the program or application as users can get access to the software directly online.

It is an open-source PHP framework which is expressive, elegant in nature. Laravel is created on the basis of model-view-controller design and uses PHP for developing web-based applications.

There are several benefits of using Laravel, such as modular packaging, architecture, and a cost-friendly framework. One of the interesting parts of this framework is that you can use the existing components of other frameworks that help the developer create faster web applications.

This platform is highly secure and safe and supports the performance of different apps. Other than that, developers get to work with this framework in a fast and easy manner, and it gets effortless to solve the web authentication challenge.

Why Laravel is the best framework for SaaS

SaaS is meant to be utilized by a large number of users. That is why developing a SaaS app is not easy and includes complicated steps and methods.

Fortunately, Laravel is known to provide excellent components and features that make the task easy for developers. It tends to make the process of development relatively easy and basic.

The design of Laravel has been done in such a manner that it is known to provide a simplified app as a final product. It is known as a reliable framework that supports apps used by multi-users and can be accessed by a large number of users at a time.

It is also known for the management functionalities of the SaaS app. It includes authentic users, free trials, and much more. Apart from that, there are a number of reasons that indicate that Laravel is an excellent framework for SaaS. These reasons are mentioned down below:

While developers operate with the Laravel framework, it gets easy for them to produce specific software modules due to the MVP app structure. These modules are known to comprise several features or only one feature at a time. It can be linked later to an original app in an easy manner.

If we take an example that you do have a store based on E-commerce and it is your wish to launch a discount offer. To carry out this, you can focus on developing one module of discounts and link it with your online store whenever you like.

This connection stays firm until the opening of the discount offer. Once you wish to end this offer, all you have to do is disable this module.

To develop a complicated customized architecture of an app, usually it needs you to allocate more resources. It can lead to code issues and be challenging for both testing and development teams. But in the case of Laravel, you can live with peace of mind as it is easier to do customization.

Isn’t it great? It surely is. The reason is that the MVC framework of Laravel is a perfect base for this particular work.

It enables both testing and development teams to work well with the components of Laravel without thinking much about the connection.

Mostly, developers tend to integrate the platform of SaaS with various third-party programs such as payment gateways, etc. These programs are known for enhancing the entire efficiency of SaaS apps.

And that’s where the concept of Laravel comes into the picture, as it helps SaaS to link with these various forms of tools. The utilization of Laravel makes it relatively easy to tackle the complicated processes that are linked with the management of API.

The built-in Blade engine is one of the best features of Laravel framework. It helps in creating various unique templates. The feature of the Blade engine assists developers while they are effortlessly operating with the HTML.

Route cache is another fantastic feature of this framework. It comes in use while dealing with apps that need various routes. Route cache is known to speed up the process of registration of routes and enhance the overall performance of Laravel.

Laravel is known to use strong passwords with the help of the Bcrypt algorithm. It makes sure that the password is encrypted. It utilizes SQL statements to avoid SQL injection attacks.

The Laravel engine lets the developers utilize templates that are predefined for the development of a new website. Another great advantage of Laravel is a widget that has in-built JS and CSS code.

Laravel is indeed the best framework for the development of SaaS apps. Several unique features should be considered. We have mentioned most of these features in this article.

Make sure you read the article thoroughly to know about them in depth. It is a reliable framework and is liked by most developers. Starting from its scalability to its simple authentication, it is indeed used by most developers for the development of SaaS apps.

Once you go through the benefits that Laravel offers, you, too, will agree with the statement that it is indeed the best framework for the development of SaaS apps.

It would make you connect with Laravel programmers for hire to develop SaaS apps, and it makes everything easy and tackles all the challenges in an easy manner. Thus, it should be your preference when it comes to the development of SaaS apps.