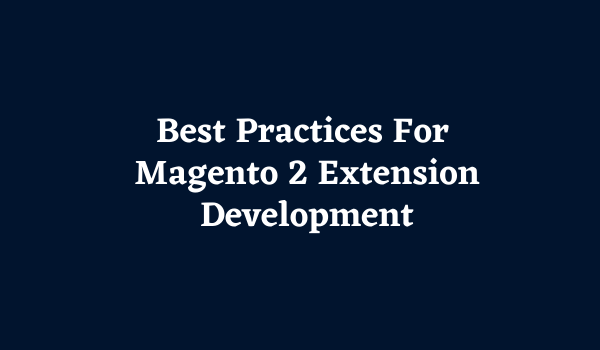 The practice of extending code rather than editing it is foundational to the Magento model of software development. However, an inadequate understanding of Magento and inability to adhere to best practices can result in failed projects.

Adobe relies on popular design patterns and the concept of modularity to simplify Magento 2 extension development for developers. By packaging core functionality into discrete modules, they empower developers to introduce new functionality without editing the Magento codebase.

In this article, we’ve put together an extensive list of best practices for Magento 2 extension development that you can follow to ensure the successful execution of your next project.

14 Best Practices For Your Next Magento 2 Extension Development Project

If you’re a developer, following best practices can help you improve the quality of your extensions and minimize compatibility issues.

And if you’re a merchant, understanding the best practices listed below will help you evaluate developers for your next Magento 2 extension development project.

Extensibility is the primary architectural principle behind Magento development. Magento allows developers to extend every part of the core application to eliminate the need to alter the default Magento code during extension development.

Developers should never edit the Magento codebase because they can achieve all the functionality they desire using plugins, event observers, and by overriding interface preferences. And if they find that the Magento core code needs improvement, they can always contribute to the codebase using Git.

A clear understanding of Magento’s underlying architecture is essential for developers and merchants alike. Magento 2 contains several improvements in its capabilities and architecture over its preceding version — Magento 1.

Merchants only require a high-level understanding of Magento 2 to comprehend how various components interact and influence store performance. However, Magento 2 extension developers need an elementary understanding of the Magento 2 framework, its components, and the architecture of a module to work with the platform.

Adobe has developed a set of rules specific to Magento that work with PHP_CodeSniffer and help developers detect deviations from the Magento coding standards. These rules are based on a combination of the Zend Coding Standards and PHP Standards Recommendations 2 and 4.

We strongly recommend that you test your extensions using this free tool and fix any violations before using them in a production environment.

4. Ensure the naming conventions are consistent

Naming conventions can make extension code more readable, understandable, and appear professional. Therefore, you should ensure the naming conventions used for files, folders, methods, and classes in your extensions are consistent throughout its code.

Try to use a noun or a noun phrase for class names and a verb or a verb phrase for a method. Additionally, make sure your naming convention prioritizes clarity over entertainment and uses a consistent case.

5. Ensure the code is reusable

Using duplicate code repeatedly can be hard to maintain. Therefore, it’s wise to write a single method or class and reference it throughout your extension instead of copying and pasting it. Adopting this practice can help reduce the time required for and the costs associated with Magento 2 extension development.

Developers should focus on writing concise and focused code that provides a generic solution. This approach can help avoid code duplication and make it easier to reuse code for future development.

6. Ensure the code is replaceable

Writing replaceable code is just as crucial as writing reusable code. Magento updates, upgrades, introduces new functionality, and occasionally deprecates the outdated ones. Ensuring your extension code is designed to be replaceable makes it easier to improve and update the code down the line.

Additionally, it facilitates troubleshooting and resolution of bugs in the codebase. The practice of writing replaceable code is fundamental to a platform like Magento that prioritizes modularity throughout its architecture.

Utility or helper classes are classes containing static methods that cannot be instantiated. Although popular in software development, their use violates the SOLID principles of object-oriented design and is considered bad coding practice.

If your extension code contains helper classes, you should consider refactoring the code to migrate those functions into their associated classes.

In Magento 2.2, Adobe gave developers access to method parameters, so they no longer need to use around method plugins. Instead, they can now modify functions using after method plugins.

9. Ensure the correct use of observers

Observers allow developers to modify default Magento behavior. However, poorly coded observers can cause instabilities and even break the entire application. To reduce issues caused during observer execution, make sure the observer:

Ensure all observers are within these guidelines so that they execute without any problems.

Therefore, using a composer.json file to package a component is strongly recommended during extension development and distribution. More importantly, make sure all dependencies are declared correctly in the file.

Therefore, you must ensure developers implement the MVC Pattern during Magento 2 extension development. Additionally, it would also help if they incorporate the correct module designs and place all HTML, CSS, JavaScript, and XML code in the right files.

PHP functions make it convenient to reuse code. However, developers should be careful when using them to avoid introducing vulnerabilities into your store. Here’s a list of exploitable PHP functions and classes to avoid in Magento extensions:

The eval function in PHP presents multiple challenges. It can make your website vulnerable to injection attacks, cause performance issues, and complicate the debugging process.

Hackers can exploit these functions by passing ad-hoc serialized strings to the unserialize function and execute arbitrary code.

The MD5 hashing algorithm has cryptographic weaknesses. Therefore, you should avoid using it to hash sensitive data. Instead, you can use SHA-256, which is highly secure for hashing confidential information such as passwords.

If you use a predetermined number to seed the srand PHP function, it can result in predictable output and make random numbers guessable, thereby creating a vulnerability in your extension.

Like the srand function, mt_srand acts as a pseudo-random number generator. However, it is not cryptographically secure, and therefore you shouldn’t use it in your extension code.

The ArrayObject class in PHP allows objects to work like arrays. When used by itself, it contains the unserialize method, which is vulnerable to exploits. Therefore, you should avoid using it in your extension code.

You should ensure all sensitive data used or processed through your extension is encrypted. If you store sensitive information inside a resource that’s accessible from an untrusted control sphere, it can lead to a security breach.

14. Avoid the use of icons in the Magento admin panel

Magento allows developers to place their extensions in the admin panel for easier access. However, incorrect placements and poor design decisions can negatively impact the admin user experience.

You should avoid placing icons in the primary navigation of the Magento admin panel. If every extension placed its icon over there, it could make the admin panel cluttered and unusable. Instead, you could add the extension icon in the sub-menu.

For example, you’re designing an extension that provides an additional API besides Magento’s API. In that case, you can place the extension in the Stores > Settings > Configuration section after all default Magento settings.

Extensions are a crucial aspect of the Magento ecosystem. They help developers extend Magento’s default functionality and allow merchants to offer advanced functionality to their customers.

Following the above Magento 2 extension development best practices can help ensure your extensions operate in unity with Magento’s core modules and do not introduce any vulnerabilities in your store security.

Jan is the Chief Business Development Officer at Staylime, a Magento design and development company headquartered in Redwood City, California. He is passionate about ecommerce and Magento in particular — throughout the years his articles have been featured on Retail Dive, Hacker Noon, Chief Marketer, Mobile Marketer, TMCnet, and many others.